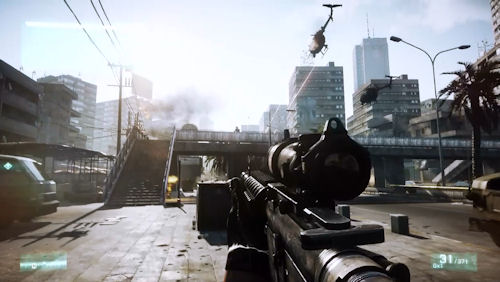 We just got a new trailer showcasing more gameplay footage from Battlefield 3.  The video is clearly taken from the PC version of the game (notice the mouse prompts) - and is just as impressive as the last few videos we've seen.

One new gameplay mechanic is the addition of hand to hand combat, shown after the player gets jumped by an enemy while trying to disarm a bomb.  It looks more quick time event than it does free form, but its still an interesting addition to the series.  Also on display is an impressive street battle, complete with helicopter gunship support.  I almost feel sorry for the enemy...almost.

Battlefield 3 is out this fall with a four player co-op mode on the Xbox 360, PlayStation 3 and PC.