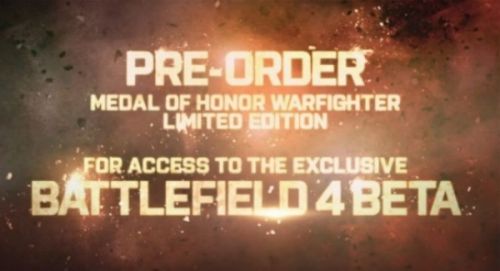 Battlefiled 4 has been confirmed by Electronic Arts in a video on the official Medal of Honor website. In true EA fashion, customers who pre order Medal of Honor: Warfighter will receive access to the Battlefield 4 beta. The beta is scheduled for the fall of 2013 with more details trickling out in the next twelve months.

We have seen this marketing before, and you can't help but imagine that one title is being incepted into the box of another to help bolster the sales of another. Halo 3 did it with Crackdown, Gears of War 3 and Bulletstorm, and Resident Evil 6 was tossed in with Dragon's Dogma. It seems like a shady tactic, but we all know that Medal of Honor isn't going to overtake Call of Duty any time soon. Just another example of gamers allowing themselves to get overly excited well in advance of the game proper being released.

Little to no information usually comes out with an announcement like this, so we will stay vigilant and see what EA decided to do in terms of co-op with their next blockbuster shooter. The co-op missions in Battlefield 3 were alright, but it would be awesome to see a full co-op campaign this time around. The Bad Company series screamed for a four player co-op campaign, and with the co-op inclusion in Battlefield 3 the stars are aligning for a proper co-op experience in the next iteration of the series.