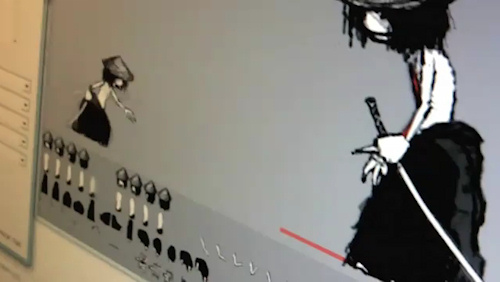 The two player co-op XBLA game The Dishwasher: Vampire Smile hit next week.  Co-Optimus should have our review of the game on Monday, April 4th - but to tide you over until its inevitable release, the team at developer Ska Studios have put out a developer diary showcasing where the game was made.

Don't expect any lavish and extravagant settings with fountains or unicorns (actually there is a unicorn), Ska Studios is a three man (well two man and one woman) team in a the basement of a house in New York state.  Still, the video is an entertaining and informative look into how some of these smaller games get put together.

In the video James Silva, the game's lead developer, shows off some of the tools he uses to build the game.  James was one of my favorite interviews at PAX East earlier this month, he was straight to the point with no fluff answers.  For instance when I asked him about why he decided to put 3D into the game, his response was simply - "I wanted to see if I could do it, and figured...what the hell."

My guess is that was the same reason behind making this behind the scenes tour.  Ska Studios figured..."what the hell."