Looking at a sequel always gives players an expectation about a game. With The Dishwasher: Vampire Smile the sequel is so much a sequel to the original game there isn’t much to compare - well, unless you count co-op. That’s what we did, scrutinize the co-op. What did we have to say about it? Well...

The new face you’ll see in The Dishwasher: Vampire Smile is a seemingly innocent woman named Yuki - only, she’s a vampire (and the Dishwasher’s half sister) with some pretty vicious weapons, as well as a quest for revenge. You see, she’s in a bit of a predicament in which she has to slash her way through 13 campaign levels to safety with three (mini-boss) executive targets in mind, and those executives have a dragon. You can play as either Dishwasher or Yuki in the campaign, or both in co-op. What’s interesting is the game changes up the levels and cut scenes a bit depending on whether or not you are in co-op, making sure to reference both characters - a definite nice touch. 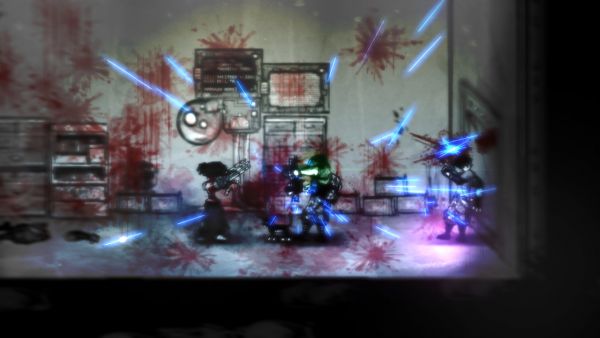 The other difference between the characters are the weapons available to each. This time the weapons are even more brutal and over the top. Dishwasher has something called “The Violence Hammer” which is just brutal and works wonders on bosses, while Yuki’s giant syringe weapon has an extremely satisfying finishing blow. Both of these sort of embody the game in that while they are serious weapons, they are also light hearted. There are several moments throughout the game with references and small jokes that are sure to make you chuckle. In such a dark and twisted sci-fi world, the comedic relief is a nice break from that doom and gloom.

Vampire Smile takes the fast pace of the first game, rushing through levels full of zombies, cyborgs and psycho bosses, and gives it a whole new depth. The controls have been tightened to the point that any action comes at the push of a button so the combat rarely stops. You can even activate the magic by holding the left trigger and pressing either X, Y, or B. The only problem is - you don’t really know what magic button does what.