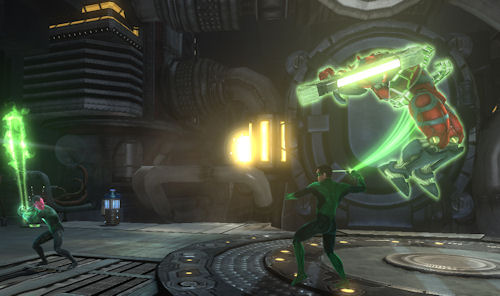 It has been a good week for comic book fans, especially those who have been following the excellent Green Lantern titles for the past few years.  Over the weekend, a new and improved trailer for the upcoming film was released, full of hundreds of alien space cops and showing war on a grand scale.  And now, there's hope that the inevitable movie tie-in game might be good, too.  Green Lantern: Rise of the Manhunters is coming in early June, shortly before the theatriocal release.  In addition to the expected green lasers and flight power, gatling guns and the iconic hard-light fists will let Hal Jordan take down legions of androids with ease.

The best news?  Two players can team up via local drop in/drop out co-op, one playing as pink-skinned future baddie Sinestro.  The press release promises lots of combos, and if the above screenshot is any indication, co-op specific moves look to be included in the mix.  More screens and the announcement trailer are after the break.  This game just shot way, way up the summer release list for me.  Anyone else interested in lighting up the blackest night with a buddy in a few months?