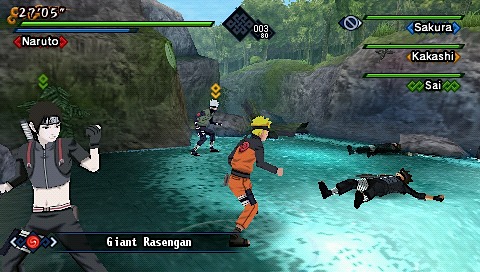 We brought you news of Naruto Shippuden: Kizuna Drive for PSP a few months ago.  The Playstation Portable title was released late last month.  In addition to a story mode consisting of more than a dozen missions, the team-based action/fighter lets you and three friends partner up via Ad Hoc co-op in Free Mission Mode.  Special combo moves that require more than one player to activate are included, as well as bonus missions for die-hard fans to unlock cool stuff from the show.  We've got a gameplay video for you showing off Naruto's moves as he and his buddies team up to take down a boss.