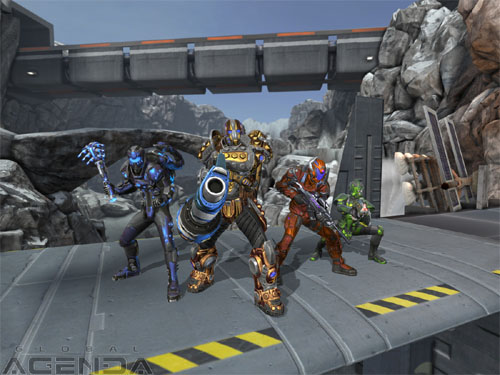 When Global Agenda launched a bit over a year ago (a game we thought had decent co-opability), Hi-Rez Studios originally planned for it to be a subscription-based game. This later changed when they decided they wanted to maintain a non-subscription based model where players had access to everything so long as they had purchased a retail version of the game.The subscription model never saw the light of day. The game also had a generous trial where people wanting to try out the game could have a fairly extensive experience for free with the usual limitations (e.g. level caps, chat restrictions, etc.).

Now Global Agenda is changing its model once again to benefit its players' wallets. In the middle of this month, Global Agenda is launching its "Free Agent" update which will essentially convert the game to a standard Free-to-Play MMO model. Players can get much of the content for completely free with this update, complete with no level restrictions. Players who already had a retail copy of the game will be upgraded to "Elite Agents." After the update, any Free Agent can be upgraded to an Elite Agent for a one-time purchase of $19.99. The details of Free and Elite Agents are as follows:

Players can also purchase Boosters from the Global Agenda Store which give players perks such as double XP, tokens, and credits or extra drops at the end of a mission for 10-, 30-, or 90-day periods.

If you've been curious about this game, but haven't wanted to bother with the trial version, the Free Agent update may be worth checking out.