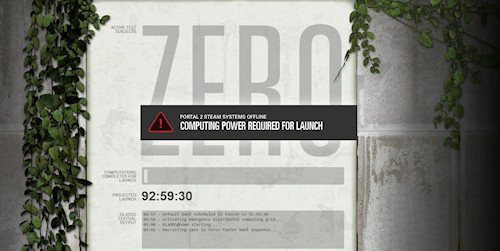 Want to get your hands on the PC version of Portal 2 this weekend?  Then get ready to hunker down and play some indie games.  In what's either considered a stroke of pure genius or a diabolical plan of an evil corporation - Valve has contrived a way for you to play Portal 2 on Steam early this weekend.

As you saw in our post covering the Portal 2 ARG, last week Valve released the Potato Sack Bundle on Steam.  This pack of 13 indie games contains some great co-op titles like Killing Floor for a big discounted price - $39.  But inside these games are Portal themed objects and levels tying them back to Valve's popular franchise.  Something was definitely up.

Now Valve wants you to not only buy these games - but play them.  And play them a lot.  Playing these games unlocks "computational cycles for GLaDOS."  Right now the game will unlock in 92 hours - or the game's original release date.  But as people play these games, the timer will tick down faster.  You can track the progress here.

Good luck - and for the sake of all things co-op - we hope you can triumph.