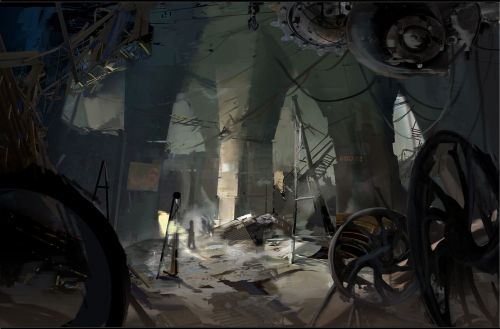 It is important to take a true work masterpiece of a video game, Portal 2, and fully appreciate every single thing that was put into making it. Now we can, as Dark Horse announced its upcoming book, The Art of Portal 2 will make taking a break from the controller totally worth doing.

Last year, Valve re-treated us to the world of Chell and the beloved super computer antagonist, GLaDOS, expanding a game that was originally created by college students by ten-fold.  To this day, booting up Portal 2 after playing the game dozens of times and wandering into the room where you’re first woken up in during Portal, still gives many players a true sense of awe that most games simply cannot achieve. Apart from its amazing storyline, to unforgettable dialogue, breathtaking graphics, and the perfection of "cooperative gameplay", it’s the environment of the Aperture Science Enrichment Center that makes the game have its own world that we all fantasize about exploring (with a portal gun, of course).

Now, you can take all of those memories with you. The 184 page hardcover book from Dark Horse Comics will feature loads of concept art with a completed vision of the world of Portal 2, among the numerous sketch works of the characters and commentaries from the writers, developers, and artists.

Diehard fans of the games will be pleased to see what Valve’s final interpretation of Portal 2’s creation would’ve been like if they had even more of a chance to show their stuff of legends. Aperture Science’s full glory will now be forever imbedded into the pages of this book, allowing you to remind yourself of all the special moments of a title that has touched the hearts of so many gamers out there.

The Art of Portal 2 will be available come October 31st of this year (no official price tag confirmed).