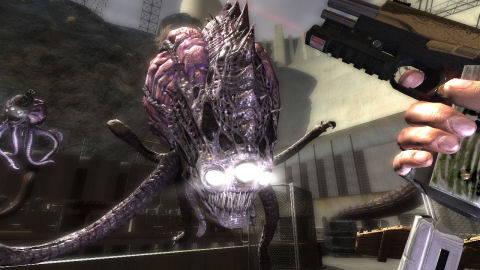 If you are like us, then you've been re-living your earlier years replaying a great conversion of Duke Nukem 3D for the Xbox Live Arcade.  I've been playing co-op all the way through, and I believe we are just shy of the infamous Football Stadium level.  But if you go outside your cooperative comfort zone and play some Duke Match amassing 500 kills and finally earning all achievements in the game you'll be rewarded with something special.  There's a hidden gallery that is unlocked that reveals two hi resolution Duke Nukem Forever screenshots.  Yes...THAT Duke Nukem Forever.

While it's not known if the latest iteration of the Duke franchise will support co-op, we can only hope 3DR hasn't taken out on of the things we loved so much about the original.  We have the screenshots posted after the Read More link...warning...one of them is sort of NSFW risky.

In similar D3D news, according to sales tracking site VGChartz the title has sold over 40,000 copies on Xbox Live Arcade in its first week alone!