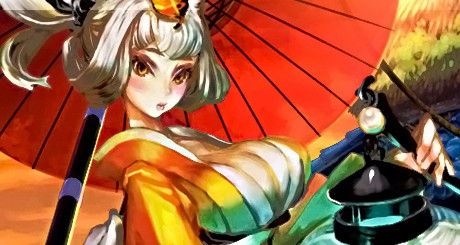 In a fascinating move by developer Vanillaware, they switch from their traditional action games (such as Wii title Muramasa: The Demon Blade) to a turn based RPG game titled Grand Knights History. The game looks to integrate players in seamless PSP multiplayer, which they're not giving specifics on just yet.

The 2D characters will be animated just like in our action games, and we're also challenging ourselves to build a new type of gameplay by fusing online and offline. Most RPGs up to now involve one person or a group of friends playing together, but we're trying to set up this new kind of game, a full-on war that all the users are connected together in. It's a war RPG where not just one player, not just a few people, but all of the players are drawn together as they fight.

Though it sounds competetive, and almost MMO style - we're hoping for a nation of players working together against other AI nations. The game hasn't even been announced for a North America release yet, but we're intrigued so far.

The game is set in the land of Ristia, home to three competing nations: Union, Avalon and Logres. You play the leader of the knight corps in the nation of your choice, supervising a team of warriors that you're free to customize and train as you like -- raising their stats, defining their appearance and personalities, and so forth.

Japan will see this title sometime this Summer, hopefully then we'll get a detailed account of the multiplayer and a release date for the NA/European regions.