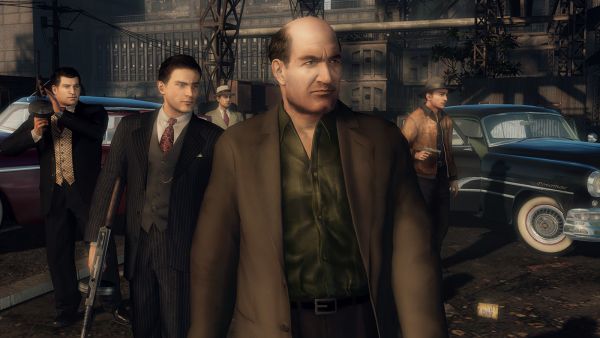 When the first Mafia game was released in 2002, it was easily one of the best PC games I played that year.  The characters and the story were extremely well done and more mature than they had been in other open-world games, and the fictional city of "Lost Heaven" felt like a real 1930s American city.  When the game's sequel was announced, I was eager to once again be taken back to a classical gangster time period and experience this more subversive slice of Americana.  Based on what I played at PAX East, though, it's a disappointing trip.

To its credit, Mafia II still manages to faithfully recreate an American era, this time the late 1940s/early 1950s.  The cars are all based on models that were manufactured during that time period, the radio blasts out "the latest hits" from Louis Prima, Bobby Darrin, and others, and people on the street are dressed as you would expect them to be.  So the sequel, like its predecessor, does a good job of making you feel like you're an aspiring mobster in the era.  The few characters I encountered during the demo's length also felt pretty genuine and didn't seem to fall into too many stereotypes.  While the setting and characters certainly seem to be living up to Mafia's legacy, the controls and gameplay left much to be desired. The demo that 2K had available at PAX East dropped players into the middle of the city with the start of a mission just a few feet away.  After hijacking a car and going for a brief joy ride in Little Italy, all of which was fine, I returned to the start and began the mission.  Your character and his buddy are selling cigarettes off the back of a truck when a few goons from a rival mob show up and shut you down.  Not letting the offense stand, you meet up with a few other wise guys and proceed to wreak a little destruction of your own by shooting up one of the rival mob's bars.  Eventually, you end up in a shoot-out with the rival gang.  This is pretty much the point in the demo where it went from somewhat amusing, to utter tedium.

For the next 5 minutes, I slowly made my way down a rather unremarkable industrial corridor.  This process entailed shooting at a group of guys until there was only one or two left, watching them run further down the corridor, catching up to them, and suddenly having more mobsters appear from out of thin air.  Rinse, repeat.  In a game where the mood and atmosphere is as important to the overall feeling of the game as the story, all of that is destroyed when you're suddenly confronted with what can only be described as "mobster closets."  What should have been a tense moment between these rival families turned into what felt like the modern gaming equivalent of stage 1-2 from Contra.  On top of all this, the controls, specifically the cover system, were awkward enough that I spent more time making sure I was safely out of enemy fire than shooting back.

Simply put, as the game stands right now, Mafia II plays like a five year old game with modern graphics.  2K Games recently announced that the game's official release date is August 24, so there's at least some time for them to fix some of these issues before the game hits store shelves, and I certainly hope they will.  With so many open-world games being released these days, some of which are pushing the limits of what an open-world game can do, it'd be a shame if the sequel to one of the more defining entries ended up lowering the bar instead of raising it.