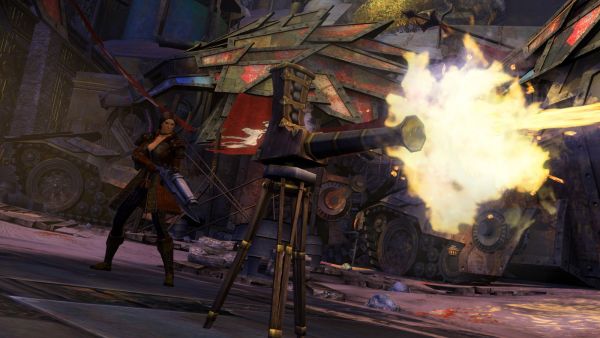 Earlier this week, ArenaNet announced the seventh profession (out of eight total) for Guild Wars 2: the Engineer. The last profession announcement (the Thief) was at PAX East, over two months back, so we're certainly excited to finally get a new reveal. Engineers will use offensive turrets, bombs, mines, flamethrowers (yes, flamethrowers!) and the like to wound their foes, but will also have the ability to drop healing turrets and throw around beneficial elixirs to support their allies. Their unique profession mechanic (besides turrets) will be Kits (in Weapon and Backpack varieites) which allow them to greatly customize their playstyle and can be swapped in and out as the situation warrants.

Weapon Kits—These are utility skills that equip a new weapon in the engineer's hands when activated. For example, the flamethrower kit creates a short-range AOE weapon the engineer can use to overwhelm foes. The flamethrower has skills like Immolate to damage nearby enemies, Air Blast to defend from ranged attacks, and Backdraft to suck enemies into range of the weapon's powerful attacks.

Backpack Kits—When activated, these special utility kits equip a backpack that replaces the engineer's current weapon skills with a set of more specialized skills. For example, a bomb kit puts a backpack on engineers that allows them to deploy bombs with a variety of effects including smoke, concussion, and fire.

Turrets—An engineer can deploy turrets: immobile allied devices that help defend and control an area. When a turret is deployed, the skill in that slot is replaced with its overcharged version. For example, an engineer can deploy a Thumper Turret to cause AOE damage, and then activate the overcharge version of that skill for a big thump attack that knocks down nearby enemies. An engineer can interact with deployed turrets, packing them up and moving them around. This removes the turret—and the option to overcharge it—triggering a short recharge before that turret can be deployed again. Only one of each type of turret can exist at a time.

Tool Belt—An engineer tool belt is a set of special skills above the weapon skill bar. It enhances the effectiveness and functionality of the engineer's utility and heal skills. The tool belt can add a self-destruct skill to turrets or a detonation option to all mines. When paired with the grenade kit, the tool belt allows a grenade barrage; with the med kit, it adds a self-healing skill.

For some Engineer gameplay videos, head over to their website. Guild Wars 2 will be released on the PC "when it's finished."