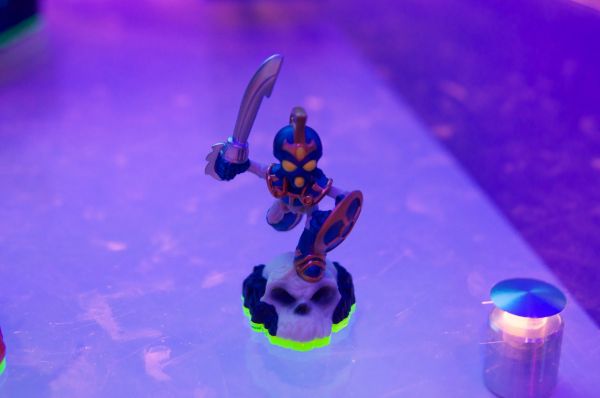 Every year I loved to be surprised by games I had absolutely no interest in before E3.  My game for day one of E3 was Skylanders: Spyro's Adventure.  To call it a game though, is a bit of an understatement, in reality Skylanders is a new product line from Activision that melds the character  collection of Pokemon with an action adventure game and versus battle brawler all rolled into one.  Oh, did I mention there's real figures to collect that save your character data and transmit it between platforms like the Xbox 360, PC, PlayStation 3 and Nintendo Wii?

The Skylander's game will come with three characters, one of which is Spyro, as well as the USB base station, trading cards, and of course the game itself.  It'll retail for $69.99 and each new character will cost $7.99.  In total there are over 30 characters that are each part of a different elemental classes like Water, Fire, Life, and Tech.  Remember Battlebeasts?  Yeah its like that.

The core of the game centers around an adventure mode that reminds me a little bit like Kameo: Elements of Power.  There's environmental puzzles to solve and enemies to kill as well as plenty of items to collect.  Little trinkets like a hat for your character can increase your strength or other abilities.  You can bring your character into the game, or switch characters at any time, simply by placing your real figure on the pedestal.  Want to start a co-op session?  Just place another character on the mount. The really cool thing is, anything you do in the game and anything you earn is saved back to the actual physical character.  So if you own the 360 version of the game and your friend owns the Wii version you can easily bring your character and progress with you.  This also gets extended to the PC where you can see your character's data online.

I got to witness this in action as we played the Wii version of the game and unlocked a sweet looking hat.  The developer quickly yanked the toy off the pedestal and swapped him with one next to us while a developer was playing the 360 version.  Suddenly in their game appeared our guy with his cool hat.

The few characters I saw were pretty well designed and entertaining - one that stood out to me was a character named Trigger Happy that shot gold coins.  The game even adds replayability by using elemental gates, areas you can only go through if you have the appropriate elemental character.

I wrapped up my sessions with Skylanders: Spyro's Adventures with a versus battle against the developer.  I came out victorious after using a fire guy that explodes into lava against a tree that shot life balls.  I'm glad he let me choose the characters for that one.

The game is out this fall on the 360, PS3, PC and Wii and looks to be a great family co-op addition.