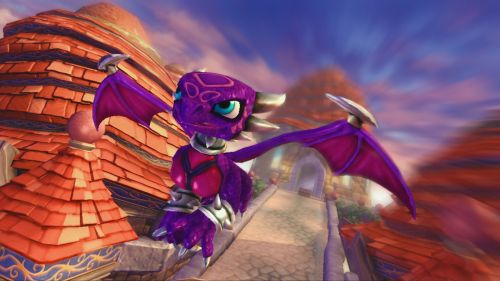 Did you make the mistake of picking up Skylanders: Spyro's Adventure a few months ago?  You did?  My condolences.  Don't get me wrong, the game is a heckuva lot of fun.  It's even better with a friend.  The problem is that procuring the little action figures is akin to a crack addiction, or so I've heard.  The starter kit (which is only like $50 right now on Amazon) comes with the game, the techno-magic portal, and three characters.  This is apparently just enough to get you hooked on spending $10 bucks a pop for additional figurines.

Well, good news, Skylanders addicts!  Two new characters have recently been released, along with a new expansion pack containing its own new character.  The stand alone characters are Cynder, an undead dragon, and Double Trouble, a magical spell caster.  They normally retail for around $10 dollars. You don't even want to know how much these bad boys are going for on Amazon and eBay.  (Hint: Between $25 and $50 smackers. Capitalism!) The expansion pack is called the Empire of Ice, and it will include Slam Bam, a four armed yeti.  A FOUR ARMED YET! I dare you not to buy it.

Of course, you could have a modicum of self control and simply try out the starter kit.  Like I did: OH FOR THE SAKE OF EVERYTHING HOLY - DON'T LET THIS HAPPEN TO YOU!!!

Skylanders: Spyro's Adventure is out now for the Xbox 360, PlayStation 3, PC, Wii, and 3DS. It supports two player local co-op and really is a lot of fun.  Try it at your own financial risk.