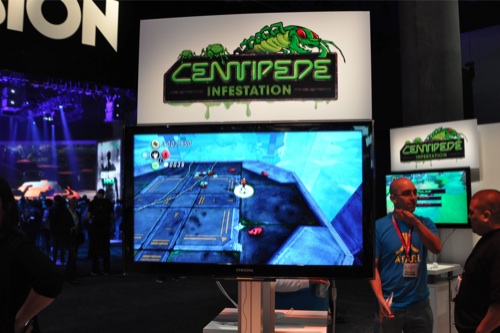 I'll admit, I was a little down when I saw the first trailer for Centipede: Infestation.  The franchise was one of my all time favorites form the days of the Atari 2600 and the thought of a modern version of the game, something in the realms of a Pac-Man DX, really made me want to see the game.  Instead what was created was a twin stick shooter based in the universe.  After getting some hands on time with the game, I'll admit, it's better than I thought.

Centipede: Infestation is a twin stick shooter on the Nintendo Wii and Nintendo 3DS.  Its clearly designed to appeal to kid gamers with cartoony graphics and a hokey story about a little girl using magical powers to restore the world  to its former beauty after an apocalypse.  Graphically the game wasn't very impressive on the Wii, but the Nintendo 3DS version looked fairly sharp.

Gameplay wise the Wii has you using the analog stick of the nun-chuck for movement and the Wii-mote to point a cursor to the area you want to aim.  Its a somewhat isometric perspective, not quite top down, and the environments are fairly simple to navigate.  You'll clear a few waves of enemies that will then unlock a gate or bridge to the next area and rinse and repeat.  It almost FEELS like the levels of Centipede, and the enemies themselves are straight out of the arcade classic.  You have your grass hoppers, spiders, ants, and other bug likes creatures that are all instantly recognizable.

The level concludes with a boss battle against a centipede.  Surprise! Shock! I know.  The game does a good job of replicating the claustrophobic feel of the original title during these sequences.  The centipede will continue to circle you as you battle it, bringing itself in tighter and tighter with each pass.

The entire game can be played in two player co-op, and while each player doesn't have their own unique powers, the game does allow players to pick up different weapons and items.  In my short play session I saw flame throwers, acid bombs, and others put to good use.

Centipede: Infestation is out this fall on the Wii and 3DS.  While the game didn't quite fulfill my dreams for the series, it does an amiable job of its namesake, making it feel like the series at many turns.  Yes, there's even mushrooms.