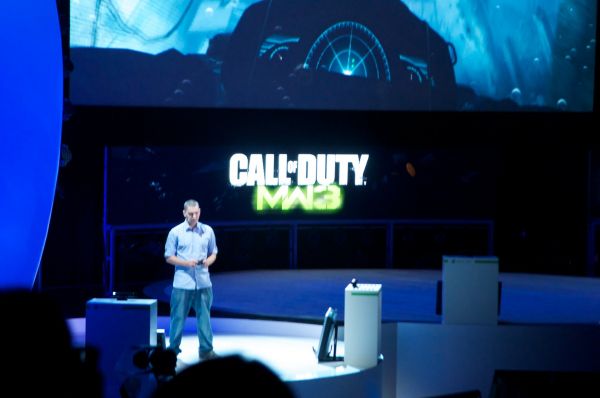 While we still cry every year to see a true co-op mode in the Call of Duty franchise de jour, you know - one in the actual campaign - we still enjoy the offerings the franchise gives us whether it's a zombies or a Spec-Ops mode. This year Modern Warfare 3 is delivering the latter - though its a souped up version of the two player co-op mode we saw in Modern Warfare 2.

Modern Warfare 3 will still offer Spec-Ops missions, slices of the campaign missions playable for two players either locally or online in co-op - but the game has also added a survival mode to the mix to add some variety.

I jumped into a session with a developer that was on a map based on a multiplayer versus map. In it was a huge radar dome and an abandoned building.  It was easy to see a few areas that would make good defensive positions.  It was a bit of a cheat - but the developer knew where we should set up shop, in a remote corner with two entrances to filter enemies through.

The waves of enemies start out simple and increase in difficulty in every successive round. We quickly dispatched the first few waves earning cash for our endeavors. This cash could be used at three stations: guns, equipment, or support. The guns station allows you to purchase new guns or upgrade your existing gun as well as replenish ammo. The equipment station offers items like grenades, flash bangs and turrets. Finally the support station allows you to purchase items like a delta squad to add extra bodies to your team or a tomahawk missile strike to dispatch something quickly.

After each of us purchased turrets we fortified our compound for enemies. Wave after wave or bad guys came at is, getting more difficult with each batch with not only enemy type, but the number of shots required to down them.  Due to my superior skill (or luck) I started to earn bonus cash for kill streaks and other in game mini missions. These pop up and give you a sub goal to complete in a short time. Eventually we started seeing helicopters which increased the difficulty further, and finally there are juggernaut waves. All through the battle it was clear communication was key as our short break between waves forced coordination for resupply - "I'll grab a new turret" or "I got a delta squad" were uttered. A nice touch for co-op players is the ability to give cash to your team mate if they are in a squeeze.

They chaos continued for us until wave 24, a record for the day. There were fist bumps.  Through that time we saw enemies from tactical troops, gas troops, suicide dogs strapped with C4 and multiple juggernauts. The entire match was a total rush and even after the 45 minute session ended I was ready for more.

Modern Warfare 3's spec-ops mode has added a further carrot to dangle in front of you by adding in a completely separate progression and unlock system for everything you do in it. That means that 24 wave match may have just unlocked a new goodie or piece of equipment to use in the next match.  The team wasn't talking details yet but they said more would be revealed in the near future.

The new Spec-Ops 2.0 will be out with Modern Warfare 3 this fall and feature two player local or online co-op. Wave 24 was just the beginning for me.