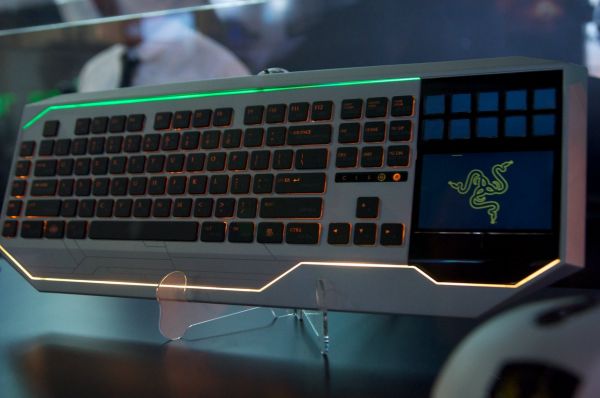 A surprise interview for me at E3 was with Razer founder Robert Krakoff at the company's booth.  After touring some new products on display we sat down for a relaxing chat about the company, PC gaming, and our gaming habits.

The product tour started with the concept of Razer's new Switchblade device.  Revealed earlier this year, this little portable gaming machine is designed for PC gaming on the go with a completely customizable keyboard that will change the keys depending on the game you play.  The device is definitely still in the concept phase and Razer seems committed to bringing it to market, but they are branching out with a few sub products first. The first device that Razer considers the evolution to the SwitchBlade is their Star Wars: The Old Republic keyboard.  This keyboard combines the customizable LCD keys with a tactile LCD touch screen.  Obviously out of the box the device is going to work seamlessly with the upcoming MMORPG, Old Republic, but I was assured the software would allow for easy customization in other games as well.

This means users will have 10 customizable buttons capable of displaying any image on a small display for macros and hotkeys as well as the 3 inch or so tactile touch pad for whatever else Razer cooks up.  The entire keyboard is outfitted with LED lighting, Star Wars style text, and a white enamel coating combined with black keys.  It's absolutely gorgeous.  I told a fellow writer last night that I want to take the keyboard on a date and court it.  That date will cost me $199.99 when it is released along side The Old Republic game from EA and Bioware.

They keyboard isn't the only peripheral in the The Old Republic lineup, there's also a mousepad, mouse and headset.  All devices offer the same theme and each have interchangeable faction emblems to suit your character in the game itself.  The mouse utilizes a multi-color LED to further customize your experience. After touring these sexy gadgets we sat down to talk about Razer itself.  I made the comment Krakoff that I've always found their products to exceed in quality, and my current favorite peripheral is their Black Widow keyboard.  We reminisced about mechanical keyboards of old and how he was so incredibly happy to bring this kind of a product to the market.  He told me that Razer didn't just come up with this design and mass produce it at one of their 8 manufacturing plants - instead - they tested every single keyboard as they game off the assembly line for defects.

Continuing on the discussion another Razer product was unveiled, one with a brand new sensor in it that hopes to solve a few problems that are inherent in both laser and optical mice.  When he told me a bout the problem, basically a slight jitter when leaving a mouse idle, it didn't sound like that much of a problem to me.  Less than 6% of users have actually mentioned it and nobody has actually returned a mouse because of it.  But Razer wanted to fix it.  So they deigned a 4G sensor that's part optical, part laser and 6400DPI.  The mouse uses a 32-bit data path (like all of their mice) along with these sensors to identify just what type of surface the mouse is on, when the mouse is actually lifted from the surface, and more.

The sensor will be included in the Razer Mamba and retail for $129.99 this month.

Our conversation ended discussing how different gamers game in different environments and that products for someone who plays competitive LAN might not necessarily work for someone who has a home office.  Krakoff seemed generally interested in the discussion and described to me how their focus groups and testing groups work for their products.

Robert Krakoff seems like a man who's never satisfied with his product in the constant pursuit of perfection.  I think this shows in Razer's peripheral line-up in terms of quality and variety.  They have a lot of interesting products coming down the pipe and we can't wait to get our hands on them.