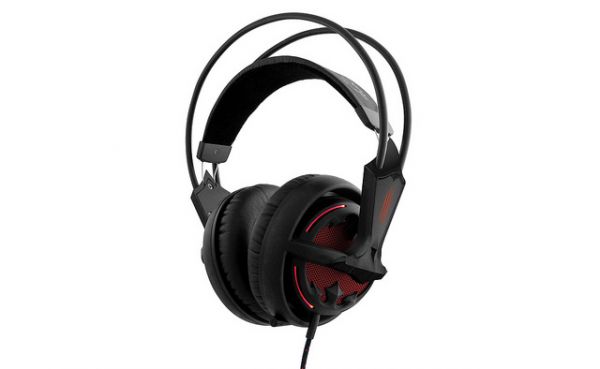 SteelSeries recently announced a set of branded peripherals for Diablo 3 on the PC.  At E3 2001 I went hands on with the mouse and headset as well as got a few minutes of time with their new Spectrum 7XB Wireless Headset for the Xbox 360 and PC.

Up first was the Diablo 3 headset, featuring a brand new design and retailing for $119.99.  This stereo headset offers a retractable mic, one that feels very strong and conceals itself well in its casing.  The design is highlighted by red LED lighting with not too obnoxious branding.  Plastic pieces make it almost look like a Victorian window design.  Perhaps the most interesting feature for me was the head band which provided a nice bounce to the light weight headset making it easy to wear for long gaming sessions. The Diablo 3 Mouse on the surface seems like a no frills affair.  It has a simple black matte finish with red LED highlighting and some gray artwork.  It's ambidextrous and features 7 buttons with a 5000DPI resolution.  The real genius in this mouse comes from it's durability - it's designed for over 10 million clicks, which I was told is about 3 times the life span of an average mouse.  Since you'll be clicking away so much in Diablo 3 the software will even keep a counter for you so you know how many times you spam clicked those evil minions with your friends.

The mouse felt decent enough and it sounds like there's quality backing, but I found it a little too small for my tastes.  The mouse will retail for $69.99. My demo concluded with some ears on of the new Spectrum 7XB Wireless Headsets.  These sets designed for the Xbox 360 (but compatible with PC) are utilizing a new wireless technology for high quality audio output.  I didn't get to actually hear the headset at the show, but putting them on, the leather closed cup design did a great job of blocking out external sounds.   SteelSeries said they are going to sell cloth earcups on their website for the headset if you prefer that over the leather ones it comes with.  For long gaming sessions the leather earcups tend to make for sweaty ears, so that's a welcomed option.  The headset will also offer a retractable microphone that felt solid and hid away nicely into the left side.

All the controls for volume and mixing are on the right side of the headset and it utilizes a triple A battery for power rather than going a rechargeable built in option.  When I asked the reasoning behind this I was told it was more for ease of use.  It's much easier to just swap a battery than it is to try to tether yourself to charge the headset - plus - you can pick up AAA batteries at just about any store.  Nothing stops the user from using rechargeable ones either.  I was told to expect around 20 hours out of the headset before needing a new battery.

All in all three solid products from SteelSeries at E3, though I really liked how the 7XB felt.   They'll be perfect for those late night co-op sessions!