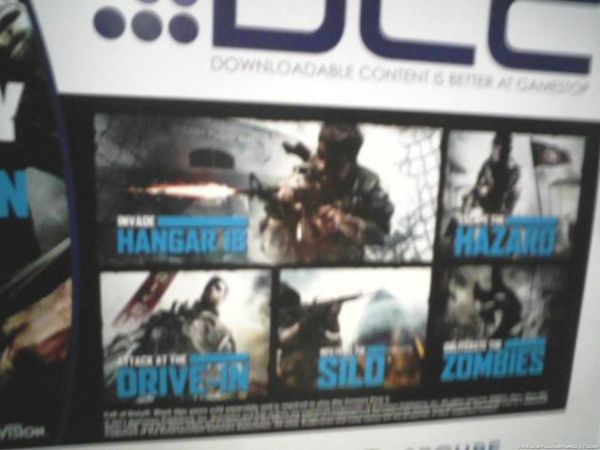 Co-Optimus' excellent coverage of E3 will continue until our E3-barrel is dry, but the days of publishers frantically giving interviews and lavishing brand new trailers and screenshots on the general populous are done for another 12 months.  Whilst some of us wined and dined, the rest of the Co-Optimus team not fortunate enough to go to LA this year (what no transatlantic tickets?) were trawling the depths of the internet for the latest rumors and speculation.

How about this for a big catch?  An image has been uploaded on Call of Duty fan website Digital Warfare 24/7 of a rumored GameStop flyer.  Could this be the upcoming Retaliation map set?  The picture is a blurry one, but suggests that there will be four new multiplayer maps entitled Hanger 18, Hazard, Silo and Drive-In, as well as an all new co-op zombie map.  With Call of Duty Modern Warfare 3 being released later in the year, this may be the last DLC that Call of Duty: Black Ops receives.  At the present time Activision have not confirmed whether this DLC is real, but if this image is fake someone has done a decent job and has too much time on their hands.  Perhaps they could spend this time trawling the internet for co-op news on my behalf instead?

Update:  Activision has just confirmed the map pack, which will be coming exclusively to the Xbox 360 first (like all the previous map packs).  The pack is called "Annhilation," not the rumored Retaliation name from before.