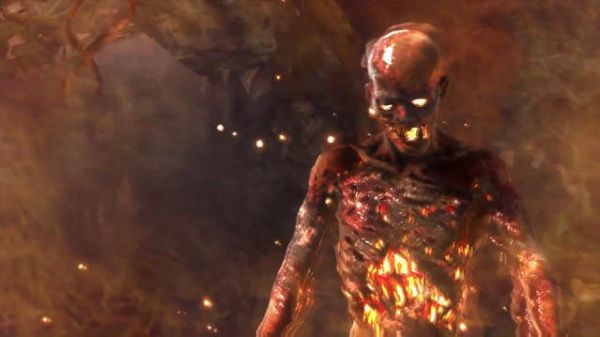 The second Call of Duty: Black Ops map pack was released yesterday, and we gave it a run-through on Combat Training. The pack includes four new maps for multiplayer (and the aforementioned Combat Training co-op/bot mode), plus one new Zombies map that may be the creepiest one since Verrückt.

Keep reading for our impressions. There's not really much to say about the multiplayer maps, as they're all very unique and yet share the same mantra of close-quarters combat. The sole exception is Drive-In, which includes a large handful of perches and second-story offices from which a sniper can dish out death. For the most part, the maps are extremely detailed, and are very consistent with the maps we've already played.

Hangar 18 is named for the fabled site of a crash-landed UFO and is centered around a an airplane hangar that houses an idling SR-71 Blackbird jet.

Hazard takes place on a golf course in Cuba, complete with makeshift bunkers and portraits of Fidel Castro adorning the bunker and bar walls. The bars, by the way, are great havens and are really neat in both concept and effect.

Finally, Silo is a sloping map that features the debris and obstacles that construction of a missile silo would entail. The central silo  can be entered from the lower level and traversed to the upper by spiral catwalk around its inner wall. Like the rest of the maps, Silo is perfect for running and gunning. With trepidation I fired up Shangri La. It's been a while since I've genuinely enjoyed the Zombies maps like I had when they were a fresh novelty. Although Zombies is inherently co-op, there is no shortage of people who will ruin your experience just to boost their score on the leaderboards, or to jerk you around.

Not to mention that Treyarch has lost sight of what made the original Nacht der Untoten so creepy: the gripping tension of a slow, hard-to-stop horde of mindless attackers. Over the last two-and-a-half years the Zombies maps have consistently added larger, more expansive maps, faster zombie types, and gimmicks like traps and warps. Granted, it's all part of the lore they're continuously developing...but the magic that was once a two-story house at midnight with no power seems to have been left behind.

Nonetheless! Shangri La is the best Zombies map in a long time, by my standards. It doesn't force players to go anywhere in particular, but allows circular paths for those waves when keeping the windows boarded up just isn't enough to stop the horde.

Add to that some seriously creepy zombies. The gas-masked undead don't do anything for me, particularly, but once I got into the mine shafts and zombies started pulling themselves down from within the tunnel ceilings, my heart pumped a little faster. Consider being approached from both ends of a tunnel, and zombies begin climbing down from above. Two soldiers with limited ammunition, crouched back-to-back in a mineshaft...yep, that was my evening. A couple of traps and a brief mine cart ride are on the gimmick list this time, but ultimately the flesh-eaters themselves steal the show. Which is how it should be. Infected monkeys do show up, which is kind of a let down (seriously: haven't we had enough of the dogs and monkeys yet?), but even they get trumped by a napalm-engulfed zombie. I enjoyed the romp, for sure.

All in all, it's a good map pack. Not a "solid" pack, not a "decent" pack - a good pack, and in my opinion the best one in the last two years (Modern Warfare 2 included).