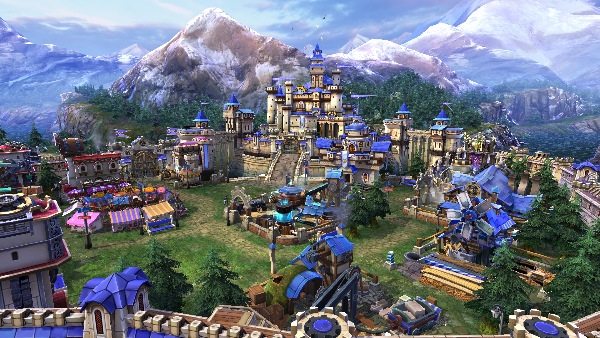 Free to play co-op? Yes, please. In the early quarter of 2012 it looks like we’ll be seeing a very slick fantasy co-op game called Prime World from developer Nival. I sat down for some quality PC time and walked away convinced I could play this game. Not only for its content, but the style and diversity in the gameplay. Here’s what I saw.

PrimeWorld is set up as a large world, featuring influences from Eastern and Western styles, depending on your affiliation. Two factions inhabit the game, both with the goal of collecting as much of the worlds natural resource of Prime as possible. “The Imperium” Western style, with clockwork like technology-based units, and the more nature oriented “Keepers” in the Eastern style. Each side has a set of heroes, each hero with a certain ability and class that you build up through the game. The heroes are primarily the same on each side (one knight on each side, one spell caster, shape shifter, etc.), but each faction will have a unique unit to compliment the affiliation.

I was not given details on these units, as they haven’t been announced yet - but it sounds like they are the biggest draw to choosing a faction aside from the visual differences. When looking at the game, you can tell which side of the “war” your player is on based on the units and the castles. Your castle is your home-hub and the primary browser style gameplay. You’ll spend resources to build different shops, buildings, and expand your castle beyond the initial small cityscape you’re given with the game.

Each building you buy benefits your world in some way. Some gather resources, while others upgrade your units. It’s a fun little side-game for those that really love the universe building aspect of free-to-play games. This also adds a level of diversity in what you can do, and the castle building can be taken with you on iPod Touch and iPad units so you’re never really disconnected. In the co-op aspect of the game, you’ll join up to four other players for a five vs. A.I. battle. Each player has their own hero, and collects their own resources through the fight against the enemy castle. You’ll play on the same faction as the other players (either all Imperium or all Keepers), spreading your heroes terra throughout the land. As you conquer areas, whatever type of habitat is native to your Hero will spread, covering the land around you. This is called "terraforming," and gives your heroes a bit of a boost when they fight on their native land.

There is also a mini-game element while in the battle screen, where one player on your side can play a game similar to the XBLA title "Zuma" to earn additional Prime. The mini-game has multiple stages, and can be played as long as that player chooses to sit back and play a ball-elimination game.

The battles and RPG element of the game will be playable on a client that works on both PC and Mac, but the castle building can be played in browsers. Sharing on Facebook will be a big deal for Prime World as well, making this a truly social experience. The co-op gameplay in the RPG side of the game is some of the best I’ve seen for a free-to-play title, with a lot of depth and detail to all of the units and gameplay type. With planned matchmaking, and the social networking capabilities, I’m fairly confident Primeworld will be a solid title across the gender gap and through the casual and hardcore audience.