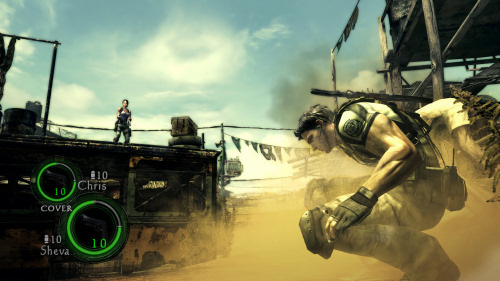 With Resident Evil 5 on the horizon, the first game in the series to feature co-op gameplay, we felt it was time to find out Capcom's thoughts behind the game.  We talked with Chris Kramer, Senior Director of PR and Community, from Capcom to get all the details of the co-op play, the controls, and Capcom's direction for cooperative games in the future.

Co-Optimus: Why add co-op at this point in the series?

Chris Kramer: It seemed like the perfect thing to do to evolve the Resident Evil series. Since the current generation of consoles are connected to the internet, co-op gameplay was a great way to totally change up the RE experience.

Co-Optimus: What were the biggest challenges they faced in turning a traditionally single player series into a co-op game? Were you influenced by any other co-op titles?

Chris Kramer: Adjusting pace and action of the Resident Evil series was our biggest challenge. Since players now have back-up, we needed to make the enemies faster and have them come from multiple directions simultaneously. The RE5 team had spent time with other co-op titles like Halo 3 and Gears of War to see how those games addressed co-op gameplay.

Co-Optimus: Does Capcom see co-op as the future of gaming and plan to include co-op in future RE games? Would that hinge on the success of RE5?

Chris Kramer: You’re definitely going to see a much larger emphasis on co-op in many Capcom titles over the next year or two. 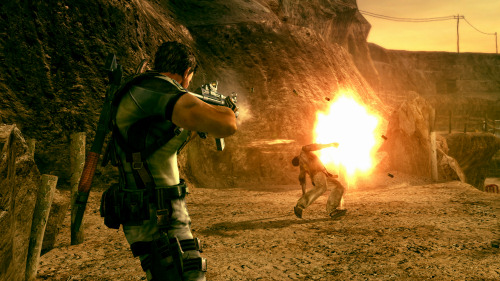 Chris Kramer: Everyone has different tastes. What’s puzzling to me is that default control scheme is exactly like RE4 on the Wii/PS2 and everyone RAVED about how the controls had been updated in that game. I think some people out there want RE5 to be Call of Duty/Halo/Gears, which it definitely is not. Once people play the game for a while, they learn how to interact with the game world.