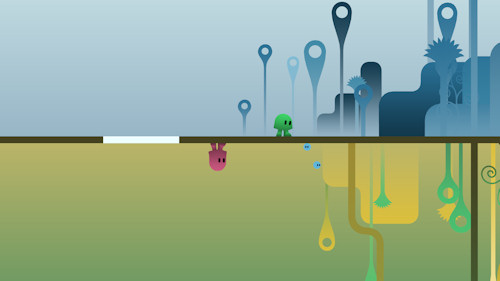 Every once and a while we get a glimpse at a game who's co-op mechanics just click as soon as you watch it in action.  ibb and obb is one of those games.

What exactly is double gravity?  It's not as easy to explain as it is to simply show you the video.

ibb and obb is the creation of Richard Boeser, an industrial design engineer who thought better of designing vaccum cleaners and instead wanted to make games.  He began prototyping and soon things fell into place.  "I knew from the start that the game should have different people interacting and cooperative play was something I wanted to experiment with," said Boeser,  "When coming up with the double gravity mechanic, two player coop seemed like the perfect way to go."  The idea has become a full game that is being developed by Sparpweed (game design and art) and Codeglue (programming).

We were told the PSN version of the game would have online co-op play added once the PC version releases early next year.  More screenshots are available from the official website.