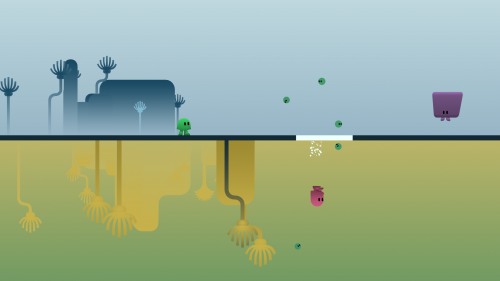 In the latest episode of the Co-Opticast, the Co-Opticrew talked about all the co-op games coming out in 2012 and those about which we're most excited. Being the resident "indie guy," there were three games that I've been told would be seeing releases this year, but indie games do have a way of suddenly slipping into new release dates. Fortunately, one of the games to which I'm looking forward, ibb and obb - a co-op platformer with a new twist on gravity puzzles - will definitely be seeing a release on the PSN (and possibly the PC) this year according to the game's developer.

So what is ibb and obb? Well, it's basically a buddy platformer where the world you and your friend traverse is split into two parts: a top and a bottom. A solid "middle" ground acts as the divisor between these two halves, with the occasional hole that allows the titular characters to move back and forth between the halves. Similar to the way one thinks with portals, how fast you're moving when you pass through these holes determines how high you go on the other side. Still confused? Well fortunately, there's a new gameplay trailer out that demonstrates these mechanics better than I can talk about them.

I had a great time in the co-op campaign portion of Portal - partially due to how I could grief my partner, but largely due to how we had to think and work together to use physics (read: SCIENCE!) to overcome the puzzles. While ibb and obb may not allow one to create your own portals to the other side, it definitely presents the same opportunity for some crazy physics fun!