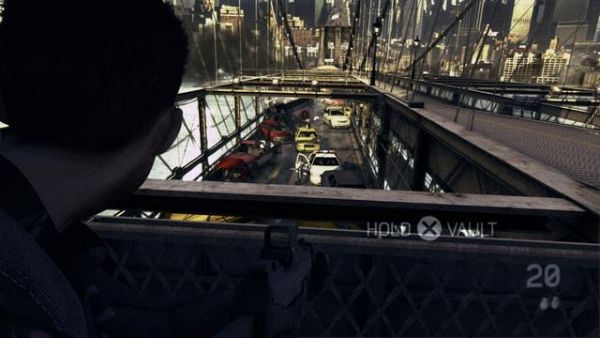 Somewhere over the Rainbow Six: Vegas lies a land containing a new game in the popular Tom Clancy series.  Two early images have leaked that confirm the game is currently in development and that the Rainbow team are in for a hard time.  Gone is the glitz, glam and random terrorist atrocities of Vegas; instead events take place in New York - grit, glum and random terrorist atrocities.  The new Rainbow Six game has yet to be given a moniker; I like the name Rainbow Six: Gun Gun Shoot Shoot, or perhaps Rainbow Six: New York.

Details of any co-op elements are also yet to be announced.  The previous Rainbow games had a 4 player co-op campaign, reduced to 2 player for the sequel, and one of the ultimate co-op experiences of this generation: T-Hunt.  It would be a bizarre choice by Ubisoft to remove the well established co-op from the franchise.

The game will be more story driven than Vegas and that morality will play a large role.  How you act in the world will determine the end of each mission and consequently the game as a whole.  An example that Kotaku cite is the decision that the players must take when confronting an innocent man covered in explosives; do you kill one person to save many others?  If the campaign is co-op, it will be interesting to see how the game tackles team morality; Army of Two: The 40th Day did a good job, will Rainbow Six: Gun Gun Shoot Shoot do the same?