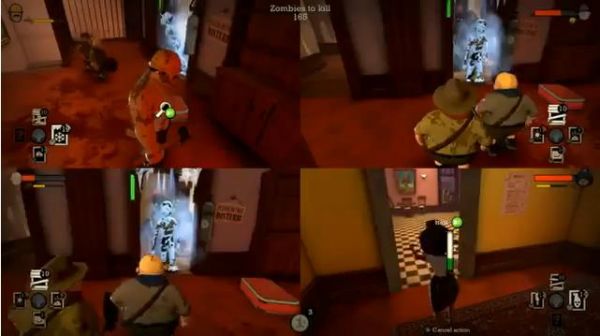 I powered on my Xbox 360 today and was greeted by a pleasant surprise.  Three co-op games have appeared in the Xbox LIVE Marketplace.  Dead Block, Major League Bobblehead Pros, and Sacred 2: Fallen Angels are all available.  Someone should really give the editor who writes the weekly Co-Op Release Alerts what for.  He missed all three of these.  (I have it on good authority that he's been sitting at a window, longingly waiting for a UPS truck, quietly chanting "EDF" to himself.)

Dead Block is a 4 player local co-op zombie defense game.  The cartoony art style, and the fact that four players can couch-it together, give the game a nice party vibe.  You can see a video with quad screen co-op after the break.  Sure, we ran the video on Monday, but you were probably enjoying the festivities at the time.  Dead Block will set you back 800 MSP.

MLB Bobblehead Pros features two co-op modes, Tandem and Turn play.  In Tandem Play, duties are divided between two players.  One person aims the pitch, while the other throws the pitch.  One aims the swing, while the other swings.  One player controls the runners on base while the other controls the batting runner, etc.  I'm not kidding!  In Turn Play, players alternate duties between each batter.  This game looks to be kid friendly, and appears to focus on simple 2 player co-op, either locally or online.  MLB Bobblehead Pros costs 800 MSP.

Sorry about missing these.  Enjoy!