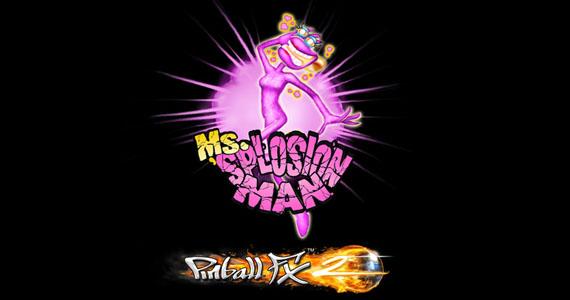 If I only have a few minutes to sit down and play a game I go straight to my downloadable titles.  However, what was meant to be 5 minutes often turns into half an hour when I start trying to beat my high score on the excellent Pinball FX 2, or try to finish just one more level in 'Splosion Man.  It appears that the Gaming Gods wish to punish me further as developers Twisted Pixel and Zen Studios have joined together to create a Ms. Splosion Man table within Pinball FX 2 - a combination that will steal time.  Not to be outdone, Ms. Splosion Man will have a pinball table within its central hub.  It's nice when companies get together.

The pinball version of Ms. Splosion Man won't be co-op, unless you count that weird bloke giving you 'advice' over your shoulder.  However, the explosive action of the game will appear - pinball and explosions; now known as Pinsion or Exball.  Ms. Splosion Man is released on the 13th July and will set you back 800 Microsoft Points.