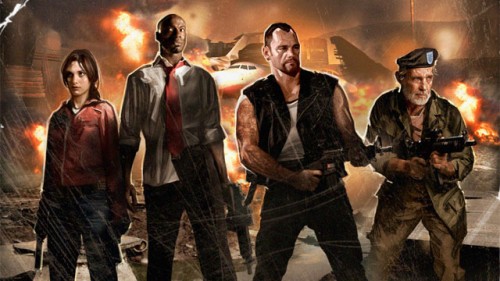 Good work, survivors!  Last Wednesday, Valve had an interesting proposal for the Left 4 Dead 2 community.  If 20,000 people could earn the "Stream Crosser" achievement by the end of Sunday, July 10th, Valve would go ahead and release the Dead Air campaign a little early.  It took players less than 24 hours.  Much less.  It actually took about four and a half hours for gamers to hit the benchmark. (Way to skew the curve, guys.)

Now your inner jerk may be saying, "Didn't I play the the Dead Air campaign back in 2008?"  Your inner jerk is right, but you can shut him up by saying, "Stop trolling my inner monolog!  The re-vamped Dead Air campaign has all the bells and whistles from Left 4 Dead 2, including melee weapons and new guns, the new Special Infected, Uncommon Infected, and Mutations and Scavenge mode."  That ought to shut him up.  Dead Air should be available for download on the PC by July 22nd.  It will hit the Xbox 360 once it passes certification.