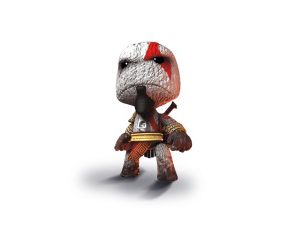 You've probably seen the Sackboy of Kratos, of God of War fame, announced as a downloadable character for Little Big Planet.  Ripten reports that the GameStop preorder bonus will include quite a bit more.  Those who preorder will get Kratos, Minotaur, and Medusa Sackboys (Sackpeople?), plus a God of War-themed level.  Quite a nice bonus, I must say.

It looks like more familar characters will be available in Sack form, too.  According to the latest EGM magazine, characters from third party games will also be making appearances as DLC for the game.  Even Disney characters included!  Let's hope these characters are free, or at least, quite inexpensive.  If the game ends up being as popular as the hype would suggest, I'm sure companies will be lining up to get their characters featured in LBP.

Lastly, For those of us who aren't lucky enough to be in the beta, Wired has posted a top 10 list of their favorite user created levels.  I personally enjoyed the "Red Rings of Burninating" level, myself.  The list is definitely worth checking out, here.