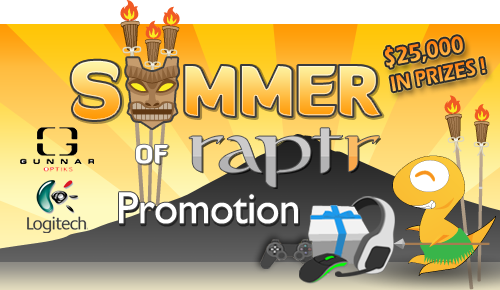 We've been involved with the Summer of Raptr contest since the beginning, and in doing so, our users can  still win exclusive prizes!    All Co-Optimus readers have to do is head over to Raptr, follow us, and leave a comment below.

Here's what Co-Optimus is giving away:

Each and every week you can head back to Raptr to follow the topics of the week and be entered automatically for other great prizes.  Today we can reveal the full list of topics to follow:

Just by following each of those topics you'll automatically be entered to win tons of great prizes.  These include:

Further details of the promotion can be found right here.   The Summer of Raptr contest runs until August 31st, and Raptr will be handling the prizes for Co-Optimus.  We'll be notifying all of our winners on September 1st!