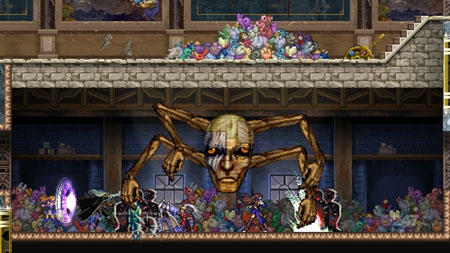 Playstation 3 owners have waited quite a while for Castlevania: Harmony of Despair, which hit XBLA way back in August last year. Their wait will soon be over, as Konami has just announced that the PSN version is coming in September.

Castlevania: Harmony of Despair is the first multiplayer Castlevania game on consoles. Teams of up to six players race through large, distinct levels based on past Castlevania games. The goal: to defeat the level boss as fast as possible, hoping for rare loot drops along the way. Yes, Harmony of Despair is a Diablo-style grindfest. It’s quite addictive thanks to the series’ tried-and-true gameplay and the cast of classic Castlevania characters, most of whom play differently from each other, with the exception of the whip wielders. I played the XBLA version quite a while (even starting an FAQ that I later abandoned) and my brother still prefers to play it over anything else for some reason, so take that for what it’s worth.

The PSN version will include a few bonuses to make up for its late release. Most significantly, it now includes four-player split-screen co-op play in addition to six-player online multiplayer. As an owner of the XBLA version, I’m quite annoyed that feature is only coming to the PSN game. Ah well. Also included is the “Beauty, Desire, Situation Desire” pyramid map, which was paid DLC on 360. It’s also the worst of all the DLC maps due mainly to its annoying boss and lack of good loot beyond the Miser Ring, so good thing they’re not charging for it on PSN.

Konami didn’t actually specify the actual release date for PSN Harmony of Despair, but September isn’t a long way off, so we’ll surely learn that soon.