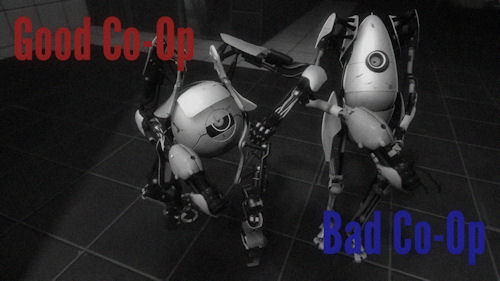 Today Co-Optimus is proud to present an introduction to our very first video series, which will be kicking off this Fall.  Called Good Co-Op. Bad Co-Op - it'll follow the co-op hijinx of Locke and Sunflower who up until this point, were sworn mortal enemies (not really).  The series originally started as something called Big Chief Friendship which we present to you today.

Big Chief Friendship started in early 2011, growing out of the shell of Big Chief Battles and turning the previous focus away from being competitive and into a co-operative affair, testing the limits of friendship. The grounded and down to earth Locke is saddled with the wild and eccentric Sunflower and is taken to task - complete games together.

Not just any games, but cooperative games that require the utmost teamwork and strategy. The first season of Big Chief Friendship began with Portal 2, a highlight to cooperative gamers everywhere. This puzzle-ridden labyrinth of Aperture Science had its fair share of challenges and through the 9 episode ‘pilot’ they had found their own sense of camaraderie. Fortunately, for both hosts and the audience came out of season 1 relatively unscathed and Locke and Sunflower remain friends (so far).

With a successful pilot run, Big Chief Friendship has been given the go-ahead for a second season. Season 2 will feature a new game, Earth Defense Force: Insect Armageddon where Locke and Sunflower will have to come together once more and fight the masses of bugs without killing each other in the process. One can only imagine You can expect a full featured show, as well as a changed name for the Co-Optimus exclusive feature in the next season of Good Co-Op. Bad Co-Op.