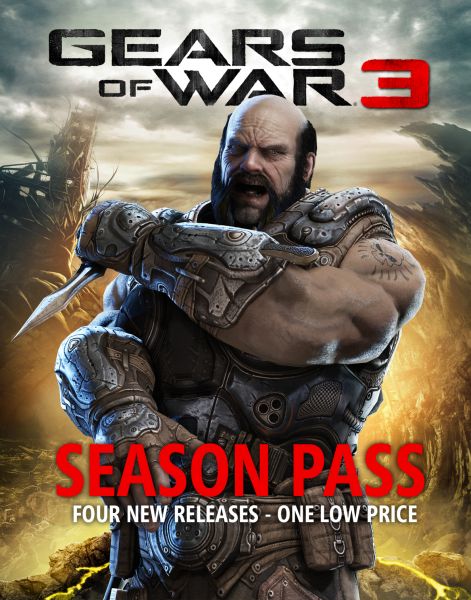 We're about three weeks out from Gears of War 3's release date.  We are nearly frothing with anticipation; it's probably the biggest co-op launch in this very crowded fall season.  As the wait shortens, new details emerge, and today, Epic announced that a "Season Pass" would be available beginning launch day, September 20.

So what's the Season Pass?  Basically, it's a way to save a little money on the future DLC that will be released for Gears 3 over the next year.  Four DLC packs are planned, ranging from campaign to multiplayer and even Horde/Beast mode, with the first coming in November.  The Season Pass will cost $30, saving you 33% off the full price of these DLC releases.  Basically, by purchasing the Season Pass, you pay up front for savings later (though Epic has emphasized that the Season Pass is not a limited time offer).  In addition to the discounted content, special "liquid metal" skins will be available to Season Pass holders.

I'm not usually one to buy stuff before I see it, but it's quite rare to get a discount on DLC like this apart from the Deals of the Week, which often come far after launch.  Serious Gears fans will be all over this like blood on Cole's Lancer.