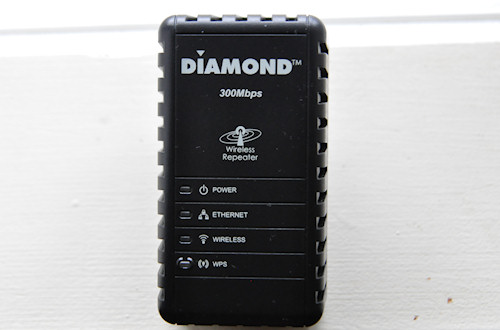 We've all been there.  It's a nice day outside, you want to do nothing more than enjoy the sun.  But there's a problem.  You just uploaded a picture of your dog Fluffy to Facebook and you need to know the second someone presses the like button.  Or perhaps you felt like playing some co-op Metal Gear Solid: Peacewalker on your PSP while laying in your hammock in the back yard.  You get to your relaxation spot only to find out your wi-fi signal is too flaky to work.  That's where the Diamond WRN300N comes in.

This simple little device will help extend the range of your Wi-Fi network.  My placing it in a spot in your house you can re-amplify your wireless signal to get a connection in areas you couldn't before.  But does it work?

I gave the device a try in my house and decided to see just how far I could extend the range of my wireless network to the rear of my house, usually an area where the signal is weaker.  Setup was extremely simple, you plug the device into an outlet and then a network cable into your PC.  Open your web browser and then navigate to a setup page, pick repeater, and then choose your wireless network.  That's it.

After setting it up I plugged the device in the farthest wall socket from my Wireless Router I could and ran tests from three locations: These reading were taken approximately 10 feet from my main wireless router.  The one on the left is without the Diamond WR300N plugged in while the one on the right has it plugged in.  You can see it actually creates two wireless networks on different frequencies. At 15 paces I waited 15 seconds for things to settle before snapping the picture.  On the left we have the networks without the device plugged in, and on the right we have them with it plugged in.  You can see that the overall strength is actually less when both are plugged in at this distance.  This didn't seem to affect performance for browsing the web or using my PSP to download stuff from this location. At 30 paces from my back door we finally see the benefit of the extender.  Though it's tough to see with the glare, my network is buried under all the others in the picture on the left.  On the right, with the extender plugged in, it's at the top of the list (in gray) and we have no problem picking up a solid signal.

But what does this all mean?  And is it useful?  For me my router already covers my entire house with almost no dead spots, so the extender didn't help until I went to an extreme condition.  For people that have dead spots in their house, or want to get a solid signal in their basement, the extender option of this device is great for getting solid wi-fi coverage for you and your guests for both gaming and internet browsing.

But there's two more uses for this device.  It can actually act as a wireless router itself and a wireless bridge.  I brought the WR300N with me to the Penny-Arcade Expo recently and used it to share hotel internet with my roommate.  It was extremely simple to set up, we created a private network with a password, and if we wanted, could even game via that private LAN.  It was incredibly convenient because the device is only the size of a large wall charger, so it's easy to just throw into your suitcase.

The other option with the device is to use it as a wireless bridge.  Say you wanted to hook up your Xbox 360 in your basement but didn't have a a 360 that supported wireless.  You'd just set this up as a bridge and then plug the Ethernet cable into both devices.  Perfect for creating quick LANs for co-op gaming.

For the price of a game ($59.99) this little device gives you a ton of options for multiplayer gaming and internet browsing on the go.  You'll also be able to extend your wi-fi network, perhaps even creating a nice private LAN with your neighbors for super fast system link gaming.