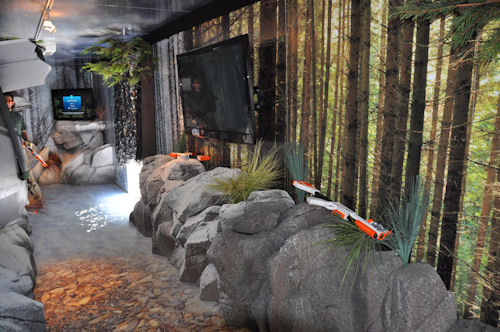 Activision's Cabela's brand is launching two games this fall, both of which will support four player co-op in "Shooting Gallery" modes.  These light gun shooter like game modes have players tackling different challenges, targets and even "bosses" together while working for high scores.

Up first is Cabela's Big Game Hunter: 2012 which launches on September 27th for the Xbox 360, PlayStation 3 and Nintendo Wii.

Then in November, the next game, Cabela's Survival: Shadows of Katmai launches on the 360, PS3 and Wii.  What's different about this game is it's also an action adventure game where players are dropped in the wilderness and need to survive all Bear Grylls style.  Badass.

Both games offer bundles as well with the respective system's motion controller compatible gun.  Both games are on tour right now in the Cabela's tour truck (pictured above) which is stopping at various retail outlets nationwide.