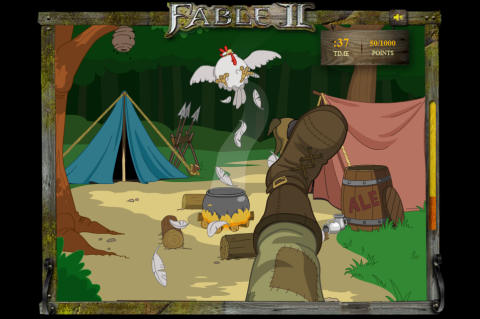 Shhhh.  I have a secret to tell you.  Do you want to be the coolest kid on the co-op block when Fable 2 launches?  You know, when everyone joins your game on day 1 and looks at your character they will say - "Hey, where did you get that?"  I'll let you in on a super secret site to give you one of 5 exclusive pieces of content for the game.

Simply hit up the official Fable 2 Site on Xbox.com and play the Chicken Kicker mini game.  Upon scoring 1000 points in the game by kicking the chicken into various perilous areas, you'll be rewarded with an actual in game item (tied to your gamertag).  Score!  There's also a slick video called "Heroes Tale" narrated by Zoë Wanamaker.  It's actually somewhat interactive and it gives you a few good or evil choices.

I ended up getting a 3 Piece Chicken Suit as my prize for Heroes Tale, though I'm not sure what I won for the Chicken Kicker game.  I can't wait to make all my friends jealous of my chicken suit.

So if/when you guys play - what prizes did you earn?