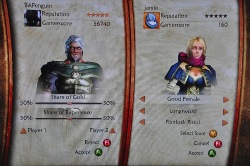 Peter Molyneux is famous for a lot of things.  He was part of one of the most popular PC Gaming companies of all time in Bullfrog.  He's had a hand in designing some of the most original games to date like Populous, Syndicate, Dungeon Keeper, Black and White, Magic Carpet, and of course Fable.  Every game Peter creates is more ambitious than the previous, and with Fable 2 this was no exception.  In fact, when it was announced the game would have a cooperative mode, I knew it would be something new and fresh and different.  And while Peter may have delivered on some of his promises, the co-op mode misses out in a ton of areas that we've come to expect as a standard feature in cooperative gaming.

I'll preface the rest of this review by saying the following.  Fable 2 is an AMAZING game from start to finish.  Whether you complete that journey with a friend or solo, it doesn't change the fact that there's a very deep experience here.  That being said, co-op appears to be more of a hindrance than a benefit.

The great part about Fable 2's co-op is it's completely drop-in/drop-out.  This goes for both online and offline.  Your buddy simply needs to pick up a controller and press the start button and away you go.  From there the host player can decide how to split gold and experience with his partner, and the co-op partner can big from a bunch of preset characters for his player.  Which brings us to our first problem, the co-op player has no vested interest in his character by jumping into a game with someone else.  Sure your gold and experience will transfer back to your single player character, but you don't get the luxury of items, customizations or any of the like.  Let's face it, one of the coolest aspects of online play is showing off your loot and cool character, and having only one player able to do this is just plain silly.

So off you'll go adventuring through the gorgeous world of Albion together, completing quests - and hacking and slashing your way through monsters.  Your co-op henchman's magic and skills will be brought up to par with the host player; which is a good thing - you'll stand a fighting chance.  It's also nice to even see the earnings the host player gets from his economic investments in houses and such split with the co-op buddy.  But when the host goes to spend this gold, we hit the next problem.