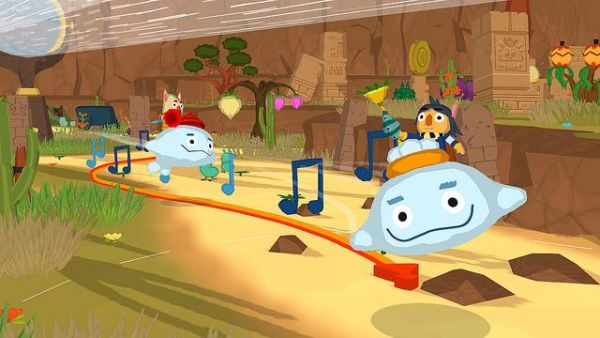 The next game from Hand Circus, creators of the popular Rolando series on the iOS is a game called Okabu.  It's something we previously spotted back in June when it was called The Tale of Okabu.  The two player couch co-op game from the developer is its first on the console.

We chatted with Hand Circus founder Simon Oliver about this move, which is a bit of a difference from what the rest of the industry has traditionally been doing.  We've been seeing big developers try their hand at the mobile market, like Epic Games did with Infinity Blade.  So why the move in the other direction with Okabu?  "A bigger platform with a  bigger canvas allows us to tell a more involved story," said Oliver, "people aren't just sitting down to play 5 minutes on a phone."  This more focused appeal is allowing them to create something a little more involved in not only the story but the mechanics of the game itself.

But that doesn't mean something that's difficult.  A large focus of the game is on something that's accessible to both the hardcore player and the novice.  They are targeting the guy who plays games all the time with his girlfriend that may not play all too often.  Sounds like co-op, doesn't it?  Well that's good because it is. The entire game can be played in co-op, with each player controlling one of four heroes that rides on the back of a cloud.  In single player you'll have to switch between the two clouds by pressing triangle.  The game's puzzles are heavily based on this cooperative play - for instance  - one hero is able to manipulate the environment with a plunger and rope.  So he might be tasked with holding a door open while player two uses a hero who is capable of controlling robots, which just so happens to be behind the door player 1 is holding open.

Okabu is showing a lot of promise, and the style of the game definitely sticks out as its defining feature.  I was told the game has a heavy African inspiration, including influences from the Planet Earth TV series.  It's not only the art style of the title that showcases this, but the music behind it that really captures you.  Okabu will feature 10 original fully orchestrated tracks inspired by these same themes.  Very catchy if I do say so myself.  While a soundtrack wasn't confirmed, it definitely sounds like it's on the table.

Okabu should be available exclusively on the PlayStation Network this Fall.