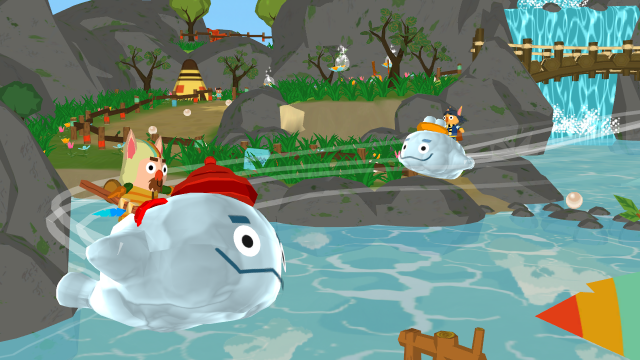 It looks like Rocketbirds: Hardboiled Chicken won’t be the only PSN-exclusive co-op game coming out on Tuesday. Handcircus’s lovely and different Okabu will launch this week as well. It tells the story of two cloud-brothers, Kumulo and Nimbe, who set out to defeat an evil empire.

Interestingly, Kumulo and Nimbe aren’t the primary heroes of the story. Four different heroes ride atop them, each bringing his or her unique abilities to the table:

As for Okabu’s co-op mode, each local player controls one of the clouds as they fight together on the same screen. In addition to blasting enemies with water squirts, the two partners must work together to solve puzzles.

Trophy hunters take note: like Rocketbirds, Okabu features a Platinum Trophy. Shiny! It launches on Tuesday, October 18. Oddly, the price has yet to be announced. I’m guessing either $11.99 or $14.99.