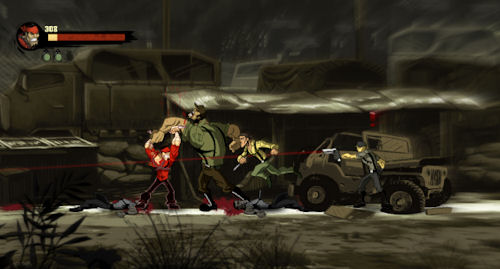 Shank was one of those games you really really wanted to like...and you did, but certain aspects of it just kept frustrating you.  Our own review points to that numerous times - the biggest culprit being - some control issues.  Well, the game is getting a sequel called Shank 2, and like any good sequel it's getting a bunch of tweaks thanks to fan feedback.

Shank 2 continues the story of our hero from the first game as the slick animated visuals make a return to the Xbox Live, PSN and PC downloadable title.  Klei Entertainment has re-written a good part of the core engine of the game to make a more tightly controlled experience.  We can't help but be reminded of the recent Vampire Smile which was another sequel that did the same thing to great success.

While the first Shank offered a co-op campaign that was a prequel to the story, it looks like Shank 2 is only going to offer a co-op survival mode.  As of now, it's a local only affair.

Right now Shank 2 is slated for an early 2012 release.