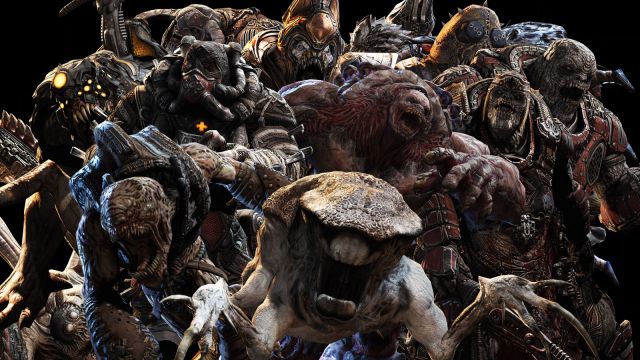 In the midst of the Great Gaming Avalanche of 2011, two of Co-Optimus’s intrepid staff members took some time out of their ridiculously busy schedules to blast through Gears of War 3’s Beast Mode.  It was a dirty job, but somebody had to do it!

I was planning to meet up with Mike for some Gears of War 3 action, but I was side-tracked by an early review copy for some godforsaken game I won’t mention here (I will make a gratuitous mention of Co-Optimus perks).  I was quickly perusing my XBL messages before I shut down my system for the evening.  This is normally a simple task, because there usually aren’t any.

I saw that Mike was on, and he had sent me a Party invite about ten minutes earlier.  Damn.  I forgot that I had turned off my Notifications.  So now I’m a jerk for not responding.  Stupid non-filterable notifications.  Instead of accepting his party invite like a normal human being, I decided to join his game in-progress.  I’m like a game-breaking surprise!

Do you know that part in Gears 3, where you’re supposed to utilize your expertise with the sniper rifle to prevent the Locusts from sounding the alarm?  That part where all hell breaks loose if you mess up?  Have I ever told you about my awesome sniping abilities?  I haven’t?  There’s a reason for that.

So now we’re surrounded by Locust reinforcements, and all hell is breaking loose.  Mike is probably wondering why his perfectly capable AI Dom is now “Revive me!” Dom.  I don’t remember the exact details, and I don’t want to get into a whole, “Who didn’t revive who,” thing, but we failed the mission.  I’m pretty sure it was Baird’s fault. (Remember: it’s ALWAYS Baird’s fault. -Mike) We wisely partied up, reloaded and brought ruin upon the Locust Horde.  We were doing fine until I took a torque bow bolt to the groin and promptly bled out.  Well, so much for playing as the puny humans.  We decided to try our luck at Beast mode.

I had played a little Beast Mode earlier, so I knew the concept.  Pick a Locust creature, destroy fortifications, proceed with the killing of all humans.  Bender Rodriguez would love this mode.  I told Mike about my strategy for using the tickers in the early levels, because you can get a lot of bang for your buck.  Also, you don’t really have to aim, reload, or think.  Love it.

We started our kamikaze runs.  Spawn a ticker, charge ahead, ‘splode, repeat.  This works moderately well in the beginning stages.  After a while the cowardly humans start to hide behind things like barbed wire, walls, automated sentry guns, and good aim.  Bastards.  Time to upgrade!

We started using Locust Drones, Wretches, and that dude with the Cleaver.  We had some marginal success against the Stranded, COGs, and familiar Gears franchise heroes.  Ripping off a human's over-muscled arm and then causally tossing it onto their dying body is grossly satisfying.  Skewering one of the hero characters with a Retro Lancer is pretty damn fun, too.

As we progressed through Beast Mode we slowly unlocked deadlier creatures like the Kantus, Bloodmount, and Mauler.  “Progressed” might not be the right word.  We were playing a private two player match, but Beast Mode is made for five players.  We were more than a little outgunned.  It was a slow chug up the ranks.  We only had a minute to exterminate the humans in each wave.  If even one measly stranded was left alive after 60 seconds, they’d Hammer of Dawn our butts back to the stone age.  Even in a grocery store!

We didn’t beat the humans that night.  Hooray for them, good triumphs over evil, and all that garbage.  Next time we’re up for Beast Mode, we’ll bring more friends.  If I get the message...