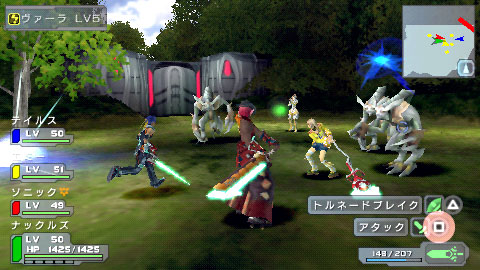 Not too long ago, we discussed the fact that Phantasy Star Zero would have online (and local wireless) co-op. However, details of the game have been scarce for a while. Fortunately, the crew at Siliconera got some hands-on time at TGS and walked away with some details. Some of the information is just confirmation of old news. The game is very much like PSO, and features the same action-RPG gameplay. Likewise, the game's messaging system is akin to Pictochat, though apparently it features a few chat bubbles that likely deal with common statements, like "resurrect me."

Some of the more interesting information is the news that the game appears not to be blindingly difficult, as long as you have a balanced party. The Siliconera team had a balanced group, having a magic user, a sword master, and so forth. They do note that boss battles are difficult, particularly one with the dragon. Siliconera was only able to play via local network, so they cannot attest to the online capabilities. However, they do say that the game successfully replicates the fun gameplay that made up PSO. Any other PSO/PSU fans really excited to have a DS?