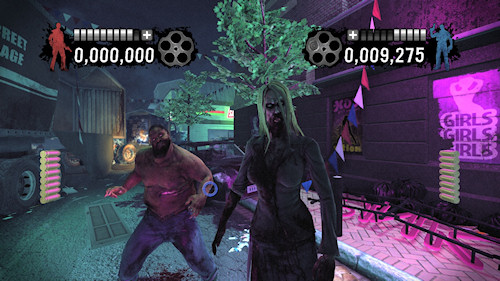 About the only reason I keep my Nintendo Wii around is for the light gun shooters I own on it, House of the Dead: Overkill is at the top of the list of those.  Now I have one less reason to keep that little white box thanks to hi-def version of the game coming to the PlayStation 3 with full Move support.  I played House of the Dead: Overkill Extended Edition yesterday and forgot just how much I liked the game and the genre

As I geared up to play the demo in two player co-op, I was given one of the Sharpshooter guns to play with.  Already I could tell I was going to enjoy this more than I should.  The nice thing about using the Sharpshooter armed with a PlayStation Move?  Pump action reload.   Sweet!

It's immediately apparent just how slick the visuals of this game could be, while still retaining that B movie style filter.  Colors are more vibrant, lighting is improved and the character models have a lot more detail.

We decided to play one of the game's two new campaign chapters - this one called Naked Terror - which takes place inside a strip club and biker bar.  In it you control  Varla (previously an NPC in the original Overkill) and her stripper friend Candy.  Both of these girls have the biggest potty mouths I've ever heard.  F bombs and sexual innuendos fly everywhere.  Not only that, they aren't afraid to speak their mind on what's going on - and considering this is their home turf - they don't take kindly to zombie strippers. The level layout was fairly entertaining and there's quite a few unique areas you'll find yourself going into like the back rooms of the strip club and the basement of a biker bar armed with the biggest, most disgusting stripper zombie you'll ever see.  And trust me - I've seen a lot of stripper zombies in my day.

The full level lasted a solid 20 minutes in co-op which seemed about the perfect length.  My arms actually got a bit tired standing there holding the Sharpshooter.  My partner and I had a solid pacing going too, trading off on reload times and covering different sections of the screen.

House of the Dead: Overkill Extended Edition looks to be a solid port of the Wii title with all the bells and whistles you'd expect.  The game even supports 3D play if you have one of those fancy HDTVs that support it.  Best of all, when the game is released on October 25th, it'll only set you back $40 (Amazon even has it for $30 right now on pre-order).  If you don't have a Move or Sharpshooter - neither are required - you can play the game with a standard dual shock controller.

I've heard both Varla and Candy are big fans of vibrating controller - so they probably use that.