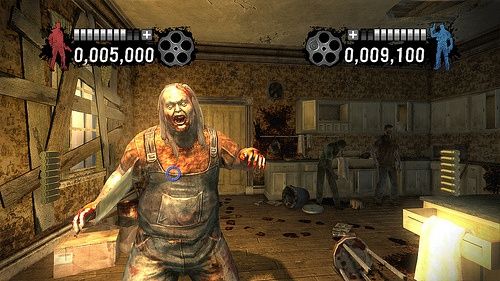 Gamers who didn't get to play the Nintendo Wii's House of the Dead: Overkill are in for a treat.  The game is being re-released on the PS3 as House of the Dead: Overkill - Extended Cut.  It will feature an HD overhaul and support 3D as well as the Move,  but we already knew that.  We didn't know about a host of new features, including Hardcore and Classic Mode, a new enemy,  a new weapon, and an extended final boss fight.  I remember the "Mother" fight from Overkill, and I really don't need that experience extended.  Gameplay-wise it's fine, but  as far as content goes -you know what? I don't want to ruin anything for you.

House of the Dead: Overkill - Extended Cut will be out on October 25th for the PlayStation 3.  It supports 2 player local co-op, but we have our fingers crossed for an online mode.  Read on for a list of the announced features and screenshots of the much-improved graphics.  You may notice that Varla Guns is on one of the alternate box covers.  Sega has alluded to her playing a larger roll in the game.  I'd wager that at least one of the two announced extra missions will focus on her.  But who knows?  Maybe the game will support 3 player co-op.  We can dream, can't we?