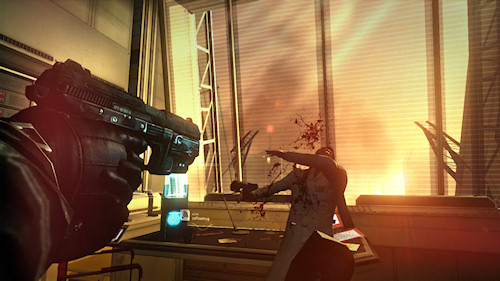 I'll admit, I was one of those disappointed to hear that the classic strategy franchise Syndicate, a franchise I loved so dearly on the PC, was being turned into a first person shooter.  All that changed though once I went hands on with the game at a recent EA event in NYC.  I was able to sit down and play through a level of the game as a member of a corporation, sent in to eliminate a threat and gather intelligence.

You start out in a transport with a fellow Syndicate member being briefed on your target.  In your head is is a militarized version of the DART chip - this chip allows you to perceive the environment's digital elements, hack anything else with a DART chip, and enter special vision modes.  Everyone in the world of Syndicate has this chip installed in their head, but theirs doesn't have the abilities that yours does.

As you follow the Syndicate member he ruthlessly takes down two guards in quick succession before they can even draw their guns.  This easily sets the tone for the game which is extremely brutal and violent.  This is highlighted by the next scenario where you get to see your DART chip in action by using something called breaches.  Breaches are special abilities mapped to the bumper that can be used to hack other devices and people.  The first ability we saw was called Suicide, which allows you to hack another human and force them to kill themselves.  As your hack completes you see the character try to fight the impulse to blow their own head off, which of course is short lived. These abilities are recharged as you take out enemies, complete actions, and take damage yourself.  Some abilities recharge faster than others adding a bit of a strategy element to the combat.  As I progressed through the mission the fire fights I got into were varied, and the game allowed you to do some really neat tricks using the DART hacking abilities.  In one fire fight I was able to extend and withdraw cover from a room, so as enemies hid and thought they were safe behind a bed, I quickly removed  it and took care of them.  In another I was able to hack a turret in mid battle to fight by my side simply by looking at it and holding the left bumper to breach it.  In another instanced I used a breach called Kickback to cause an enemy's gun to jam and quickly charged them and finish them off.

The strongest ability I saw was based off the persuadatron in the original game, and with it you could persuade an enemy to fight by your side.  It definitely seems like the abilities are something you're going to need to utilize, the enemy AI was quite impressive and the animation that accompanied their actions equally.  Enemies dove and slid into cover, retreated and regrouped, and generally didn't just charge straight at you - you could see they feared you.  Combat is easily the most satisfying aspect of the game, and when you convince a guy to pull out a grenade and blow himself (and the 3 guys around him) up - it's hard not to grin an evil grin.

Graphically Syndicate is gorgeous and its easy to compare it to a Blade Runner inspired universe.  There's plenty of bloom and bright lights and every area of the levels seem alive with technology.  TV boards and advertisements are everywhere and your HUD adds to this with statistical displays of items you look at that appear as part of the world.  Melee combat also plays a big part in Syndicate and with developer Starbreeze's past pedigree of melee combat in the Riddick games, it was incredibly satisfying and brutal to see some of the takedowns available.

Obviously the bigger final question in all this was - what about Co-Op?

An EA rep gave me a few details on it, but said that a proper reveal would be coming soon.  Syndicate's co-op mode would be online for four players.  There will be an entire campaign with a loose story that relates to the game's single player campaign.  Players will still be utilizing breach abilities with all of those in single player available in co-op, plus some brand new ones that will only be available in co-op.  Other than those scant few details they were tight lipped.

While Syndicate might not be the game fans had hoped for in the franchise's revival, it certainly is a game that stands on its own.  The open ended level design gives it a bit of a Deus Ex feel, but the game clearly geared towards action and combat.  I was told not to expect stealth gameplay, though you can certainly sneak around in certain areas.  All in all Syndicate is now firmly planted on my radar, if the co-op campaign is as tight as the single player level I played we're in for an early treat next year.