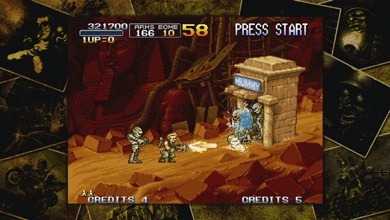 The second installment of a popular 90s era co-op series was released on the Playstation Network this past week. Metal Slug 2, which first hit the arcades in 1998, is available for download for $8.99.  That's a fair price for an excellent sequel, which added a host of new weapons to the formula, including the powerful laser gun and better armor piercing shells for the Metal Slug itself.  A better deal might be Metal Slug Anthology, which is available for Wii and PS2.  If you have a backwards-compatible PS3, you might look into that game, which includes no less than seven Metal Slug titles on one disc, including 2.  In any event, Metal Slug 2 is a great game, and certainly worthy of a playthrough for fans of classic co-op.