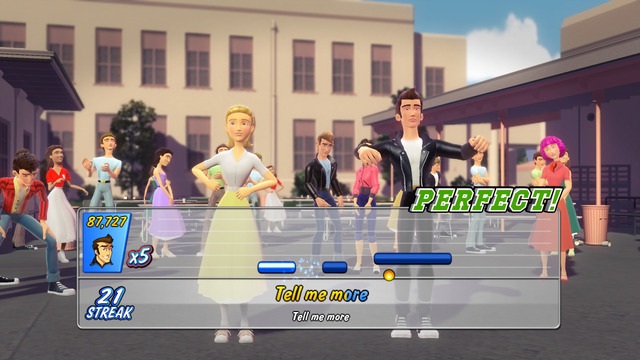 Winter gaming, has me a blast.  Winter gaming happens so fast.  I met a game, crazy for me!  Grease Dance released on the 25th. Well- a, well-a, HU.  Tell you more, tell you more?  Then check out Read More!

Like a well oiled assassin, the upcoming Grease Dance for the Xbox 360 Kinect and Playstation 3 has snuck up on us.  Brought to you from the party all night developers at 505 Games, Grease Dance will allow 2 players to co-op through 15 hits from the classic Grease film, as well as 5 other rocknroll hits of the era.:

SING!: The game features 15 song compositions from the original film and 5 bonus classic rock 'n' roll tracks.
DANCE!: Hours of fun with rock 'n' roll routines from the movie, including duet choreography and freestyle sections where players can express their individuality and dance for increased points.
GAMEPLAY MODES: Game includes Dance Mode and Karaoke Mode with both featuring versus and co-operative play.
COOPERATIVE GAMEPLAY: Up to eight-players can compete in Party Mode -- two teams of four players consisting of 2 dancers and 2 singers at any one time.

If imagining stepping into the shoes of Sandy and Danny was not made clear enough in 505's press release, how about a video showing off the game?  If I know my core Co-Optimus demographic, you are all going to be very excited about this game:

Which musical would you like to see made into a computer game?

I would like to see West Side Story made into a game, but using real jets and sharks.