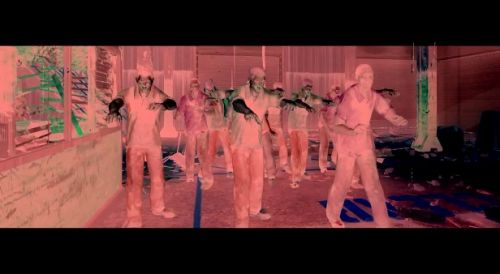 Alright.  That's fine.  It's grainy.  Kind of gory.  I think i saw a creepy clown and some type of Kuato-monster.  But it's just so cheesy, and not in the Marion's Piazza Super Cheese kind of way.  There's been a ton of videos like this.  After so many ho-hum clips, I was beginning to forget what made Overkill so frick'n awesome.  And then I saw this:

Oh, by the way, WARNING: there's lots of blood and gore, one giant naked breast, at least four f-bombs, abuse of the disabled, abuse of meat, inappropriate use of an animal corpse, and probably a bunch of other stuff I didn't catch in just one viewing.  And there also appear to be a few MINOR SPOILERS.

WARNING: All the previous warnings apply, and then some.

Are you still here?  What the f*** is wrong with you?  Get your ass to Gamestop and trade in that crappy copy of Battlefield 3 and get a f****** man's game.