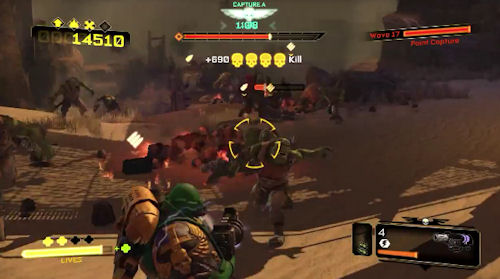 It's been almost two months since WH40K: Space Marine has been released into the wild.  The much anticipated (at least by 40k fans) "Exterminatus" co-op mode released on the PlayStation 3 and PC last week, and is now live on the Xbox 360.  The co-op mode will take a meager 337 MB of hard drive space, so get to downloading!  I also noticed that there are slots for four more DLC packages, which is very interesting, given that some honchos at THQ seem less than impressed with the title's performance.

I'm happy that the DLC is live, because I can now finally give the game a proper Co-Op Review.  Everyone likes revisiting a two month old game in the middle of the holiday gaming rush, right?  Right?  Anyone?  Ahem.  Luckily for Space Marine, I'm a fan, and the first 10 minutes I played of Exterminatus appealed to my inner Adeptus Astartes.  We'll see how it holds up after a few hours of Ork stomping.  Expect to see the review up soon.  Space Marine is out now for the Xbox 360, PlayStation 3, and PC.  It supports four player online co-op.